Born in Piazza Armerina, in the very heart of the Sicilian heights and hills, Gianfranco decided at a very early age to start studying foreigner languages and literatures in order to compare them to the Italian one. He attended a High School which at that time was quite a novelty within the Italian schools: a Liceo Linguistico, that is a Foreign languages High School.
It was there that Native English teachers & a very open didactic attitude lit up in him a genuine passion especially for either English and Italian literature.
After this, a new decision was up to be made: the College.
At that time there were no difference yet between pre-graduate and post-graduate at the Italian Universities and Lettere Moderne (Italian Language & Literature and General Humanities) was quite a hard degree to earn: twenty-one oral exams and a final Enquiry Work (the so called tesi). Despite this, Catania city, shadowed by the restless giant Etna, helped him, as he spent several years at the board house hosting both local and Erasmus students and the inspiring company of some clever and passionate mates.
After graduation, for Gianfranco a no-stop-travelling age began: first he moved to Florence and started working for a workshop restoring ancient books in the very lively Central Market of Florence, where he had the opportunity of studying the masterpieces of the Florentine art and architecture and at the same time listen to all the different Italian languages spoken by the Tuscans and foreign people from all over the world.
Always in Florence, started holding lectures and travel guides focused on the Italian Language, History and Culture for a company working throughout the area of Siena, Florence and Arezzo.
Time came then for a teaching experience in Lombardia, in the area of Bergamo, at an Institute including different Licei where he taught Italian Language and Literature, History, Geography and Latin.
At the present, Gianfranco spends most part of the year in the exotic – and at times chaotic – Mediterranean island of Malta, where he is given to work as an Italian language tutor, to administrate his newly created website italianlessonsmalta.wordpress.com and to collaborate with a chain of bookshops. 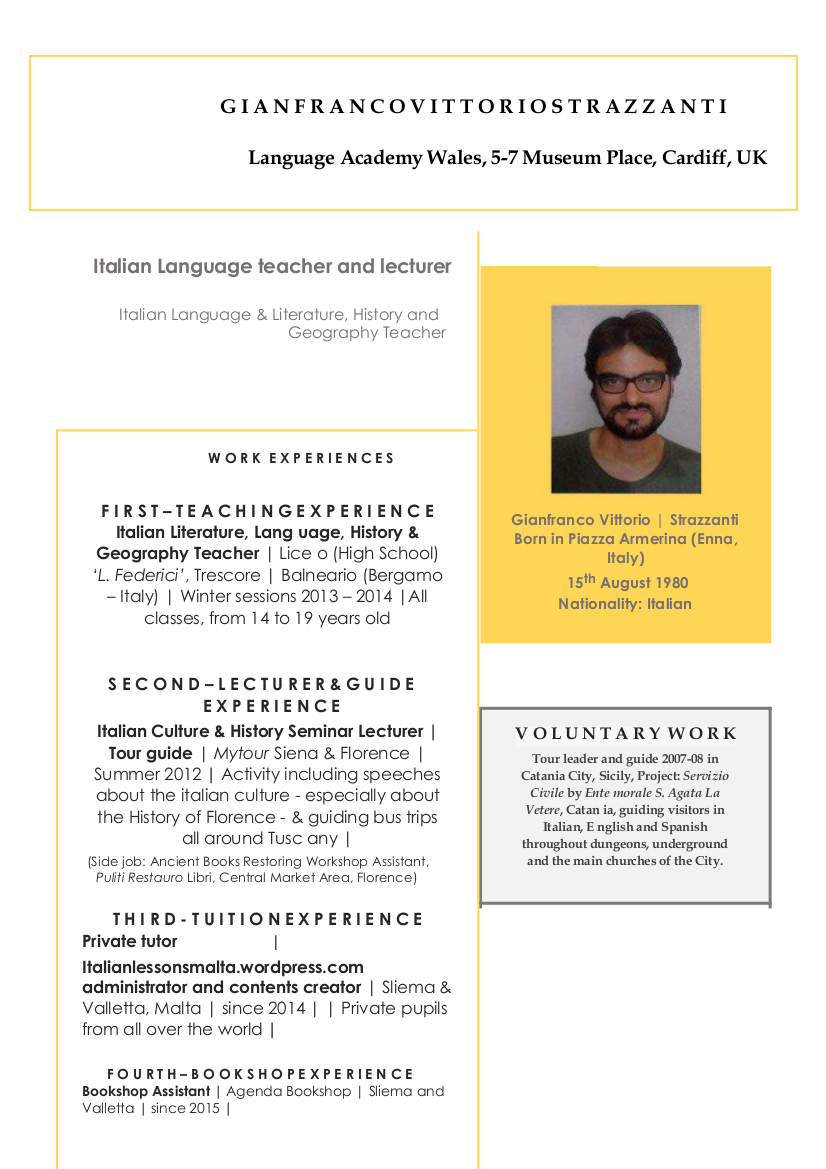 One of the main difficulty in learning a new language does not usually consist in the language itself, but in an excessively schematised approach to it.
Languages should not be learned the way one does with times tables, but by making experience of them.
In this sense the lecturer should aim especially at creating a highly involving environment where each student can ripen his skills by living memorable situations.
This is the reason why Gianfranco’s lecturing is based on reading texts aloud, listening to songs and on collectively debated issues.
As learning is not a passive activity at all, especially for such a varied language as Italian, so influenced by the cultural richness of the land where it is spoken.